It’s not often that our engineers are so passionate about a project that they submit letters to their local or state representatives to affect change. Or spend time working to get a bill passed in congress that updates outdated laws. In the case of the Pikes Peak Summit Complex, members of our team knew they had an opportunity to affect the change needed to achieve a path towards Net Zero water, and on-site water reuse in the state of Colorado.

Dating back to the mid-19th century, when Colorado was mostly farmland, legislators in the state enacted some bizarre water laws. One of which stated that capturing water for on-site reuse was illegal known as the Colorado Doctrine. Why? Because according to law, the water not being used by farmers upstream belonged to farmers downstream and held no provisions for “greywater.”

Fast-forward to 2013. To complete an environmentally-friendly visitor’s center on top of a 14,115 foot mountain with water conservation objectives, it was time to rethink and update some of these outdated water usage rules. All while keeping in mind and planning for extremely aggressive sustainability goals (ex. Living Building Challenge).

Here are some definitions for water reuse that will be helpful to understand: 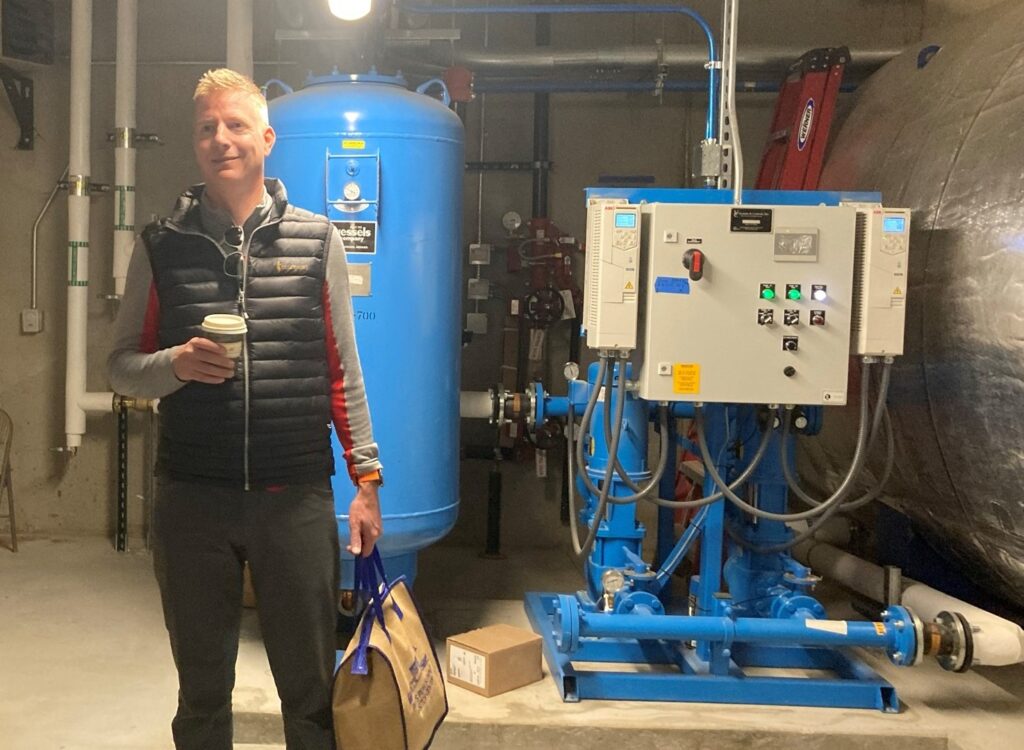 On his tour of the Pikes Peak Summit Complex, Pete Jefferson examines the domestic water booster pumps that allow for clean, gray and black water circulation.

In 2013, Colorado House Bill 13-1044 passed, which concerned the authorization of the use of greywater. However, in 2015 the State Plumbing Board discussed prohibiting greywater and purple pipes being used indoors to ultimately flush toilets and urinals. Pete Jefferson, Principal at BranchPattern, worked with a handful of other Colorado-based engineering firms to send letters to support the State Plumbing Board to explicitly allow the use of greywater systems for flushing, as well as irrigation purposes.

The goal of these engineering leaders was for the State Plumbing Board to adopt the international plumbing code as written without any exclusions or amendments, specifically for the chapters regarding greywater. Although, this effort was conducted with forthcoming Pikes Peak Summit Complex in mind, it really impacted all future projects with progressive goals towards indoor greywater use and purple piping. Thanks to these firms rallying together, and with USGBC Colorado’s support, the Colorado State Plumbing Board allowed for greywater use in toilet/urinal flushing, which paved the way for positive sustainable change in the region.

However, the journey was long from over. There was still a chance that county codes and local plumbing boards could derail the progress being made at the state level. In the state of Colorado, counties have their own building code adoptions and plumbing boards (as well as all other disciplines). Only if a county doesn’t have their own board or building codes do they follow the state regulations. The state needs to be the most progressive or the county can’t adopt those codes. 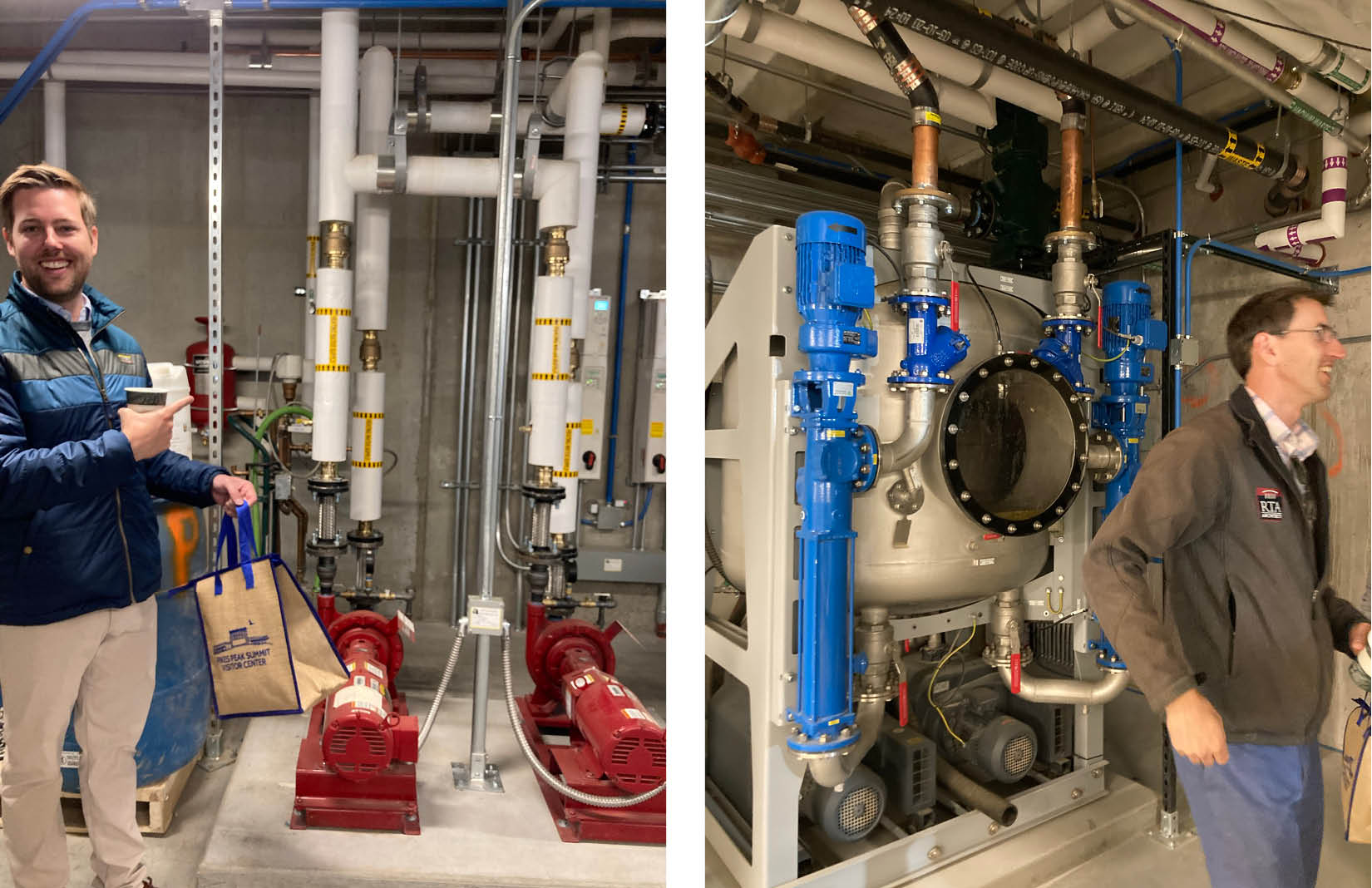 For the aggressive water reuse goals at Pikes Peak Summit Complex to become a reality,  El Paso County, needed to adopt new codes allowing water reuse. About 5 years after Pete’s efforts to get the state plumbing board to accept indoor greywater use, Miles Dake, Associate Principal at BranchPattern, alongside the local architect team at RTA, provided the nudge to the local county plumbing board. This team of advocates worked to make sure codes were adopted that allowed the use of greywater to flush toilets.

Thanks to the hard work and diligent team effort, the Pikes Peak Summit Complex project opened to the public in June 2021, complete with an onsite wastewater treatment system. This system takes blackwater and greywater, treats it, and recycles it to flush toilets. It’s also designed to treat rainwater, even though technically that’s still illegal in Colorado.

Aggressive sustainability goals sometimes take aggressive advocacy efforts to change our building codes. In this case, the time and energy spent in making the code adoptions resulted in some significant water savings and will make a difference in water conservation in the future. Through one project’s directions and goals, hopefully other projects in Colorado and throughout the country continue pushing the envelope towards Net Zero Water. 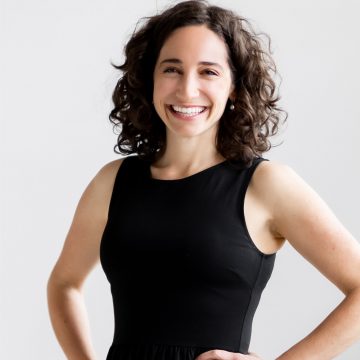 3 Signs the Industrial Sector is Trending Towards Carbon Neutral Buildings